Paraphrasing Pascal (Mathematician, Scientist and French Philosopher, see Pascal’s Theorem and Pascal’s Principle), BPM has secrets that reason itself does not understand…

Those who work in optimization and BPMN process modeling need to master these concepts of exclusive, inclusive and several other gateways with clarity, so that the result of their work is assertive and within the standards determined by BPMN 2.0 notation.

Learn more: Why and how to use the most accepted BPMN 2.0 notation

So, from philosophizing and weaving theories on this subject, let’s now learn even more about exclusive, inclusive, and implicit gateways.

Examples of bpmn 2.0 exclusive and other gateways: Everything there is to know.

When defining workflows, gateways are very important because they can:

Important: Gateways must not be confused with decisions. They do not make the decisions, they only direct the flow according to the decisions previously made (typically in a task).

In other words: the gateway is used to control the flow of the process and define ramifications, branching, merging and joining paths.

In addition to the rules defined in the specification there is a set of concepts and ideas called “best practices” in the BPMN world. In this article we will adopt those defined by Bruce Silver in the book BPMN Method and Style as a reference.

Learn more: GUIDE: The 10 most common errors to avoid with BPMN symbols

Let’s define the BPMN 2.0 notation for each gateway:

BPMN 2.0 Exclusive Gateway example: It can be represented by either a diamond with an X, or without the X:

When dividing the flow, it directs the flow exactly to one of the output branches. Although it is common practice to converge, it is optional for the Exclusive gateway and according to Bruce Silver’s modeling style guide, should be avoided.

BPMN 2.0 Inclusive Gateway example: A diamond with a circle inside.

When dividing, one or more branches are activated depending on a formula configured in each flow. All active input branches must be completed before converging on another gateway.

BPMN 2.0 Parallel Gateway example: The diamond must have an addition (a ‘plus’ sign) symbol inside it.

When used to split the flow, all output branches are activated simultaneously. When converging parallel branches, it waits for all input branches to complete before starting the output stream. There is only one situation where this timing is not necessary. You know what it is?

If convergence is preceded by a non-trigger finalizer then the convergence gateway is not required!

BPMN 2.0 Complex Gateway example: The correct notation must be a diamond with an asterisk inside it.

The complex gateway represents deviations and convergences that can not be represented using the other gateways. This “complexity” is implemented through a rule defined in the gateway itself, which allows a greater flexibility in flow control.

BPMN 2.0 Event Gateway example: Within the diamond, there is a double circle, inside which is a hexagon.

This is always followed by an intermediate event or a message-receiving task. The flow sequence is routed to the next event or task that occurs first. Usually we use it when the deviation is caused by an external participant.

BPMN 2.0 Exclusive Start Gateway example: Represented by a single circle with a hexagon inside. 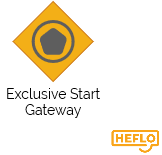 Did you know that a gateway can also start a process? In this case each occurrence of a subsequent event initiates a new process instance.

BPMN 2.0 Parallel Start Gateway example: Symbolized by a diamond with a circle containing an addition symbol (a ‘plus’ sign) inside of it. 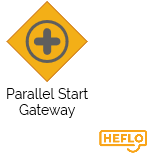 Only with the occurrence of all subsequent events does a new instance of the process begin.

BPMN 2.0 Implicit Gateway example: This does not have a default symbol. 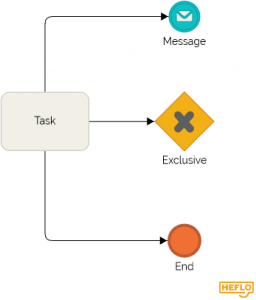 In truth, there are tasks with multiple output flows, with a split behavior, similar to parallel gateways. These sequenced flows may also receive a condition and in this case the arrangement is similar to an inclusive gateway. But be careful! Avoid using conditions at exclusive gateways. This is not good practice.

If you want more clarification on the BPMN 2.0 exclusive gateway, as well as inclusive and other gateways, and any other issues related to business process automation, sign up for HEFLO, a process modeling software tool, and start Taking the First Steps

Also, if you want to master the best notation for modeling business processes, watch the video below. It explains how to create your first BPMN diagram.