Kanban workflow: create your board in 5 steps

Kanban is one of the techniques people who employ agile methodologies use.

Kanban was born in Japan as a way to manage inventories and production lines so that you could work on the just-in-time system, where a resource is only made available just as it’s needed.

Among some of the pillars of the agile kanban methodology are:

The idea of ​​kanban workflows is to create tables with consecutive lists of activities where cards flow with specific tasks.

In this way it’s easy to know in which stage of the process each of the tasks are, who is performing them and other details about their execution.

Here’s an example of a kanban workflow: 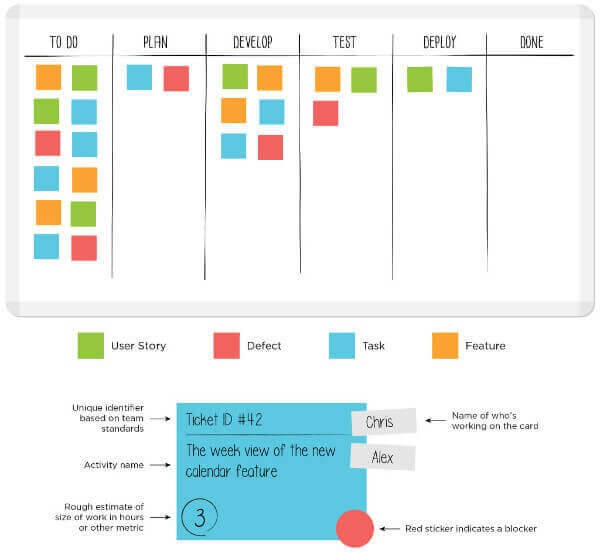 But how do you determine your workflow lists to set up your kanban framework?

Here’s how to do it, step by step.

Also see: Agile Scrum and Kanban: Don’t get them confused any longer!

5 steps to create a kanban workflow

The first point is the need for a collaborative workflow, that is, multiple people or teams are involved and need to communicate quickly.

Also, it doesn’t make sense to use a kanban workflow in a process where there is no clear flow of tasks and ordered activities.

For example: activities that require immediate decision-making based on sudden scenario changes, such as surgery, for example; or that require creative effort and a lot of subjectivity, such as the direction of a movie for the cinema, don’t fit properly into a kanban workflow.

2- Carefully map each step of the process

Before creating the task lists, do the following: process mapping and understand each of your steps, especially when tasks actually change hands, as this is the key to defining when a card will move from one list to another.

Therefore, defining who the agents of the process are can greatly help. When you notice that another person or team will assume an activity, this is a good indication that you should create a new list.

3- Be aware of possible bottlenecks

If there is a process step where there is a great possibility of a delay or lack of resources, it’s important to be aware of them when defining the lists, later.

4- Create the lists corresponding to the activities

The easiest way to start creating lists for your kanban workflow and setting the input list, which many call the “To Do” and the list where the completed tasks should be placed, usually called “Done”.

But you can customize these lists by giving a more familiar name related to your activity. So, those who work in digital marketing, in the creation of blog texts, for example, may refer to the entry list as “guidelines” or, in the case of a mechanic’s shop, the list can be called “vehicles”.

The following list should match the first task that you must perform. Normally, no one gets to do anything without first stopping and thinking a little. So a list often used at this point is a “Plan,” or planning.

In the case of the workshop, it could be “diagnosis” and content creation “definition of the approach”. So, depending on the stream you’re creating, you can create different names for the kanban workflow lists. Ideally, they should be intuitive and easy to understand.

Kanban workflow lists for a mechanic

Remember when we talked in step 3 about being aware of potential bottlenecks? In a workshop, the lack of pieces can be one of these bottlenecks and in a content agency, the delay of approval by the client.

To prevent your kanban workflow from “sitting” on a particular card indefinitely, it’s a good idea to create a “blocked” list.

Whenever the person responsible for a task realizes that he or she will not be able to complete it for a reason out of their control, they place the card there and describe the reason for the delay on the card.

And if you’ve already mapped these types of delays and bottlenecks, as suggested in step 3, you can even define symbols and abbreviations that will make it easier for the project or kanban workflow manager to make the necessary arrangements.

5 – Define colors for the cards and facilitate control

We’ve commented that one of the pillars of kanban workflow is to allow quick and intuitive visual control.

Therefore, in addition to tasks, it’s possible to define some special characteristics that certain entries have, thus facilitating process management.

For example, by including agendas or vehicles in the corresponding lists, it’s possible to use 3 card colors to indicate whether that text or service is normal, urgent, or stuck.

Thus, the colors of the cards may represent some information relevant to your business. This could be identifying for which customer you’re doing the work, where you’ll make the final delivery, the language in which you should write the text and many other variables depending on your area of activity.

Check it out and be inspired: 3 Kanban board examples created by experts in the field

Creating and modeling increasingly agile and efficient workflows can be made easier with the use of technology.

HEFLO, intuitive, cloud-based process modeling software, has a library of process diagrams for you to access, view, and edit as you like, by simply signing up for free on the platform.